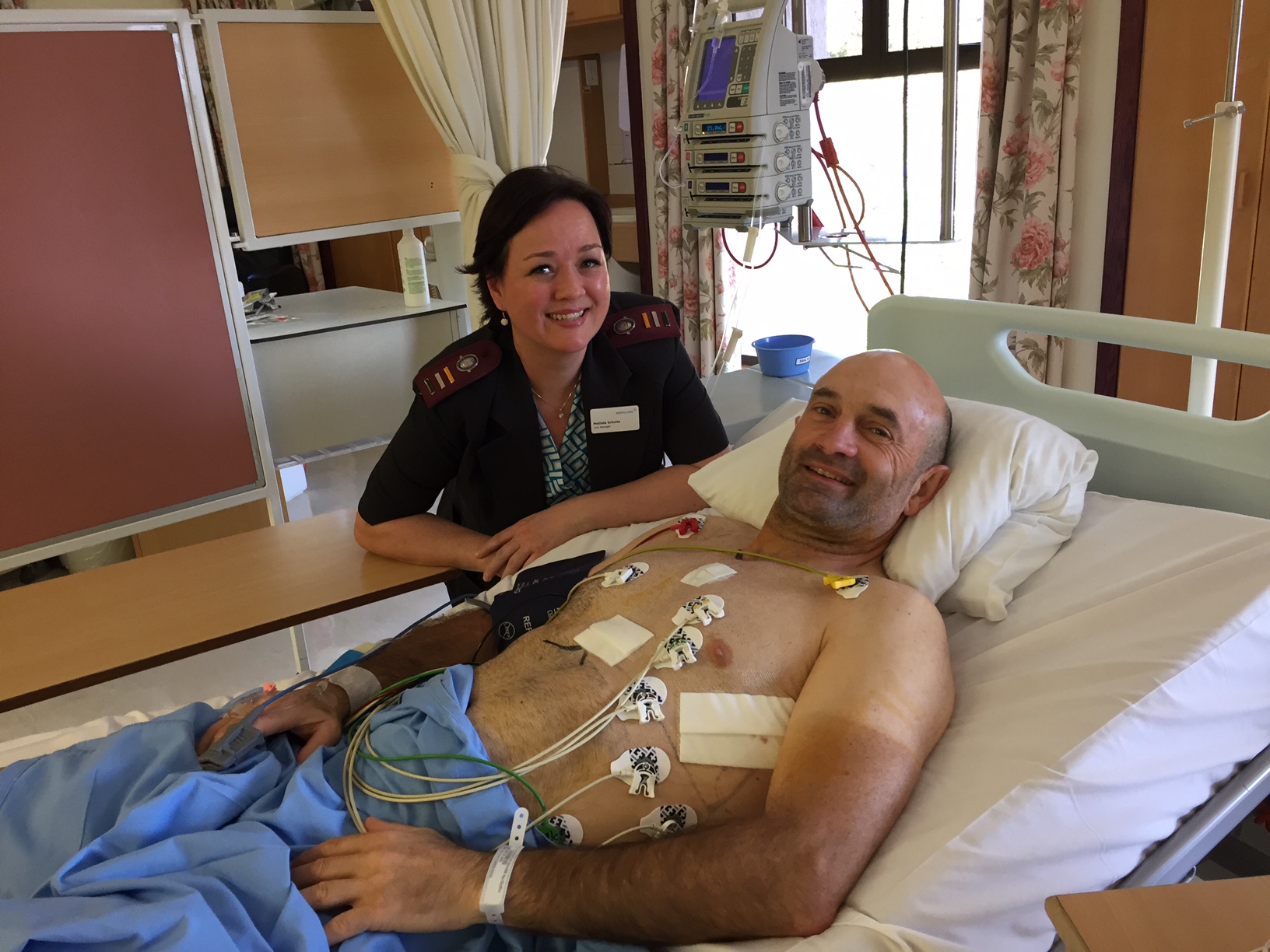 IN A FIRST IN SUB-SAHARAN AFRICA, A NEW-GENERATION SHOCK DEVICE TO PREVENT SUDDEN CARDIAC DEATH WAS IMPLANTED AT MEDICLINIC PANORAMA TODAY

Panorama – On Monday 21 November 2016 Dr Razeen Gopal, Cardiac Electrophysiologist at the Cape Town AF Centre located at Mediclinic Panorama, implanted a shock device under the skin without a single wire touching the heart of the patient. Mr.Jan Wiehman (55) of Welgemoed, Bellville became the first patient in Africa to receive a subcutaneous shock device, also known as a Subcutaneous Cardioverter Defibrillator (S-ICD), to prevent sudden cardiac death in the patient.

The second procedure is currently in progress, and Dr Gopal will perform the third tomorrow (Tuesday 22 November 2016), to complete the first series of subcutaneous cardioverter defibrillator implants in Sub-Saharan Africa.

Sudden cardiac arrest (SCA) is a serious, life-threatening medical emergency that happens abruptly and without warning. During SCA, the heart’s electrical system malfunctions, and the heart is no longer able to pump blood effectively to the rest of the body. The lack of blood to the brain causes the person to lose consciousness quickly. If the heart is not shocked back into normal rhythm within less than three minutes, brain damage and death can occur.

The first patient, Jan Wiehman, an ardent cyclist, suffered sudden cardiac arrest three years ago on 1 December 2013 during a cycle race in Stellenbosch. He was in the leading pack when he suddenly collapsed. “My brain was awake, but I could not move”, he told us during an interview. Miraculously his life was saved by paramedics on duty, who transported him to a hospital in Paarl where his heart was shocked into normal rhythm in time. Doctors who studied the ECG which were taken during his cardiac arrest, could not believe that he had survived this near- fatal event. Jan remained asymptomatic for two and a half years. He eventually developed symptoms such as sudden palpitations and lightheadedness. After a battery of tests and assessments, doctors recommended the implantation of a cardioverter fibrillator due to his high risk for sudden cardiac arrest.

The EMBLEM S-ICD System is the first and only FDA approved product with both the device and the leads inserted beneath the skin, with no leads inserted through any veins, and thus with no leads placed inside or even touching the heart at all. “This leaves the heart and blood vessels untouched and so provides a safer alternative to conventional implantable defibrillators without the complications associated with cardiac wires,” explains Dr Gopal.

“Unlike traditional implantable defibrillators, it does not require leads in the venous system, eliminating potential sources of complications related to such leads or pockets, the most feared being infection,” said Dr Gopal.

This is of particular importance in young patients, since the new, subcutaneous device can simply be pulled out and removed. A traditional transvenous system can only be removed during delicate surgery since the wires tend to become submerged and entwined in scar tissue.
Dr Gopal explains more about the indications for the implant and the benefits: 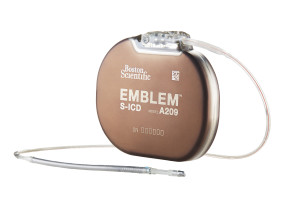 The Subcutaneous Implantable Cardioverter Defibrillator shock device is 83.1mm wide, 69,1mm high and 12.77mm thick and weighs 130 gram and is implanted in a space between two muscles on the left side of the patient’s body.

The procedure is explained in this video:

The ten steps of the procedure are:

Step 1: Draping and preparation of patient for general anaesthesia and the procedure. The patient thorax is marked for precision incisions. The patient was wheeled into theater at 10:00 after some preparatory tests. 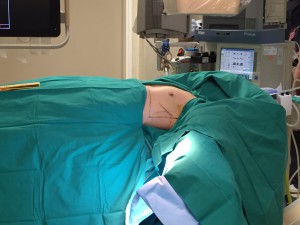 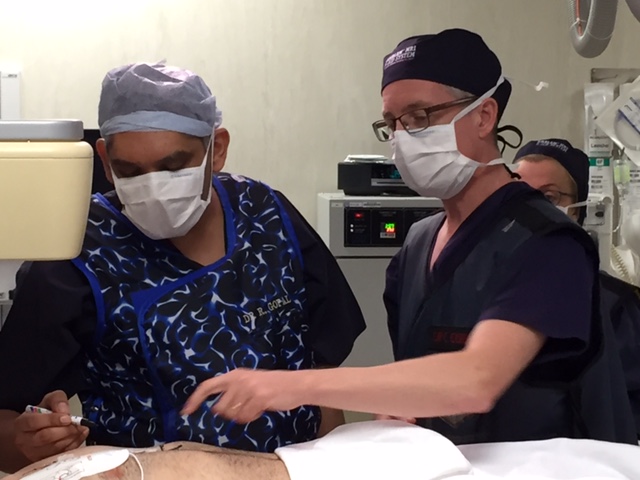 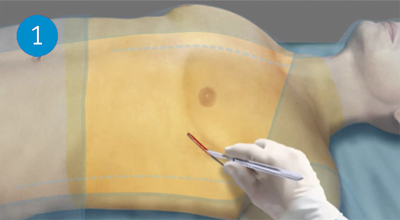 Step 3: The device is placed in a space between two muscles in the left flank (the Latissimus dorsi muscle and the Serratus anterior muscle). 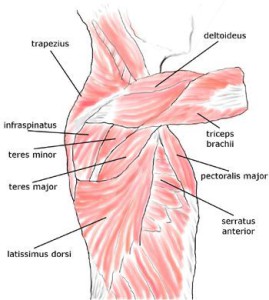 Step 4: A tunnel is created underneath the skin adjacent to the sternum (breast bone).

Step 5: The shock lead is positioned to run firstly from the device underneath the skin, to the bottom of the sternum – thus from the left side of the thorax to the centre of the thorax. 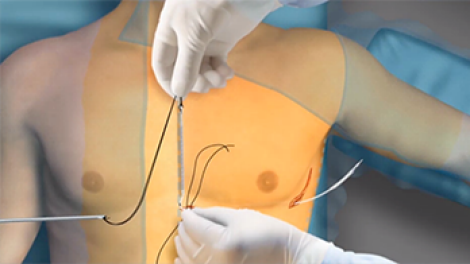 Step 6: Then the lead is pulled upwards through the tunnel under the skin. The second half of the lead makes a 90 degree turn and runs straight upwards adjacent to the sternum, but below the skin. 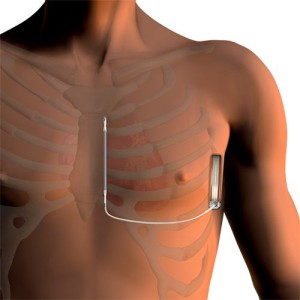 Step 7: Dr Gopal and team check that there is no air trapped in the tunnel. They also check that the lead is positioned as close as possible to the bone. This is of particular importance in a patient with a high body fat content, since fat around the lead will increase electrical resistance and may disrupt the electrical signals.
Step 8: With the device and lead in place, the doctor stimulates the heart to create ventricular tachycardia in the patient, to check if the device will recognise and diagnose a potentially fatal heart rhythm immediately and deliver an appropiate shock to the heart in order for the heart to regain normal (sinus) rhythm. The shock was administer at 13:21 and the device reacted 14 seconds later to shock the heart back into normal rhythm. 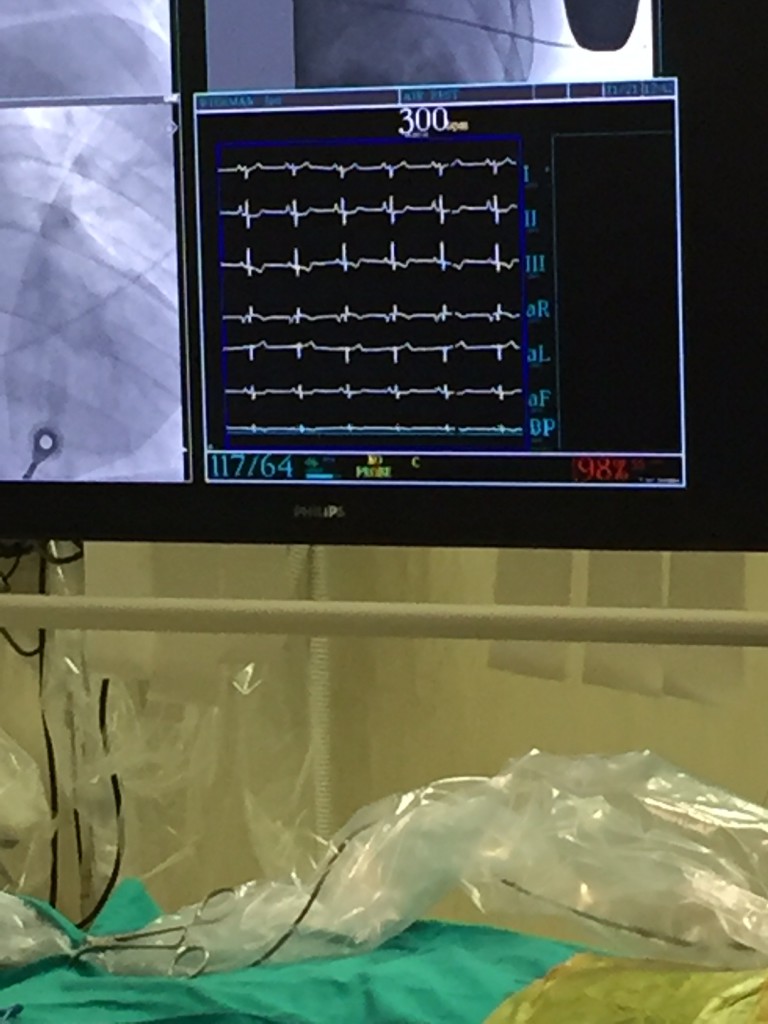 The patient’s heart was stimulated and beats at 300 betas per minute.

Step 9: If the doctors are happy that the device reacts appropiately, they close the incisions and will wake the patient soon afterwards. The patient was wheeled to the cardiac ICU at 14:00.
Step 10: Most patients will be discharged a day later. At 17:00 the patient was sitting up and smiling for a picture. He was not in pain and quite chirpy. He talked about his cardiac arrest three years ago and his close brush with death. “Now I have a safety net in the form of a inplanted fibrillator,” he said. 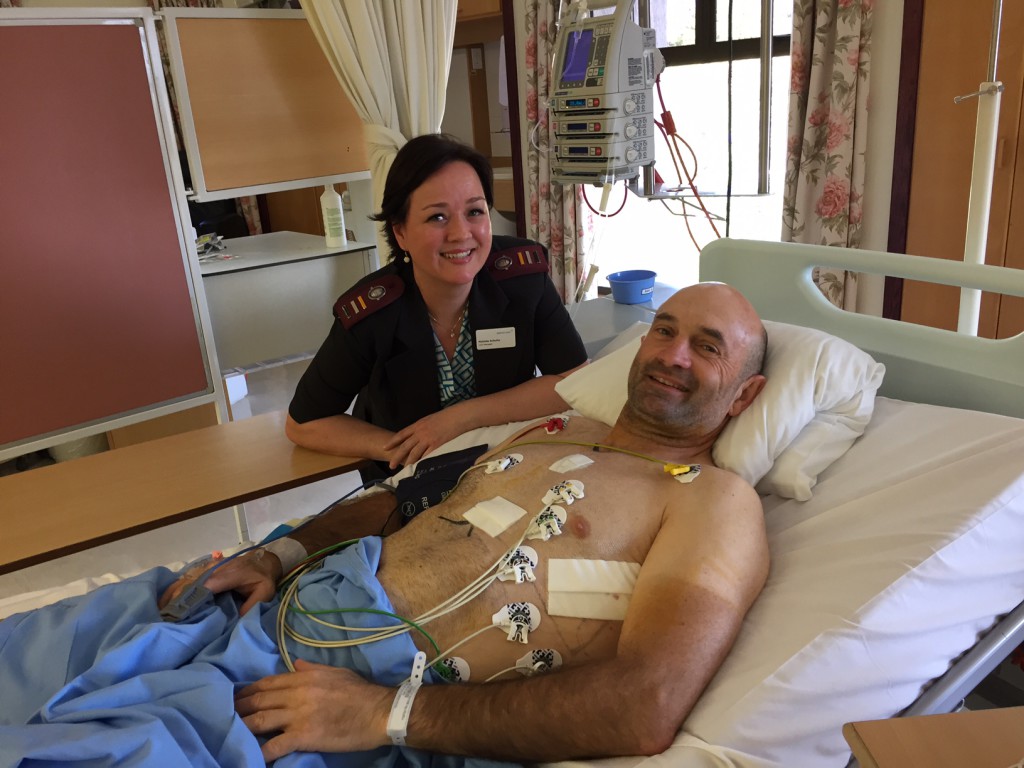 Mediclinic Panorama Hospital General Manager, Riaan Vorster, reinforces the importance of such a procedure “It is important for our patients that they can benefit from such technology; the research has shown that the Subcutaneous Implantable Cardioverter Defibrillator has very low complication rates. The cost to patients is almost the same as for the transvenous system, thus we can offer new technology at a similar price.

We need to offer solutions that are going to positively impact our patients’ lifestyles.”

“Mediclinic is always investigating how the needs of our patients can be answered through innovation and we believe that Dr Gopal’s introduction of this technology into our hospital is one of these remarkable situations,” Vorster concludes.

Some facts about the Subcutaneous Implantable Cardioverter Defibrillator in a nutshell:

Also note:
This week, Dr Gopal and his team will also implant the Watchman device. This device is implanted in the left atrial appendage and acts as filter to prevent blood clots from entering the bloodstream and potentially causing a stroke. This device now offers hope for patients with atrial fibrillation who cannot tolerate anti-clotting medication. This treatment modality will now be available at Panorama Mediclinic.

For more information on the procedure, the device and Dr Gopal, visit www.capetownafcentre.co.za.