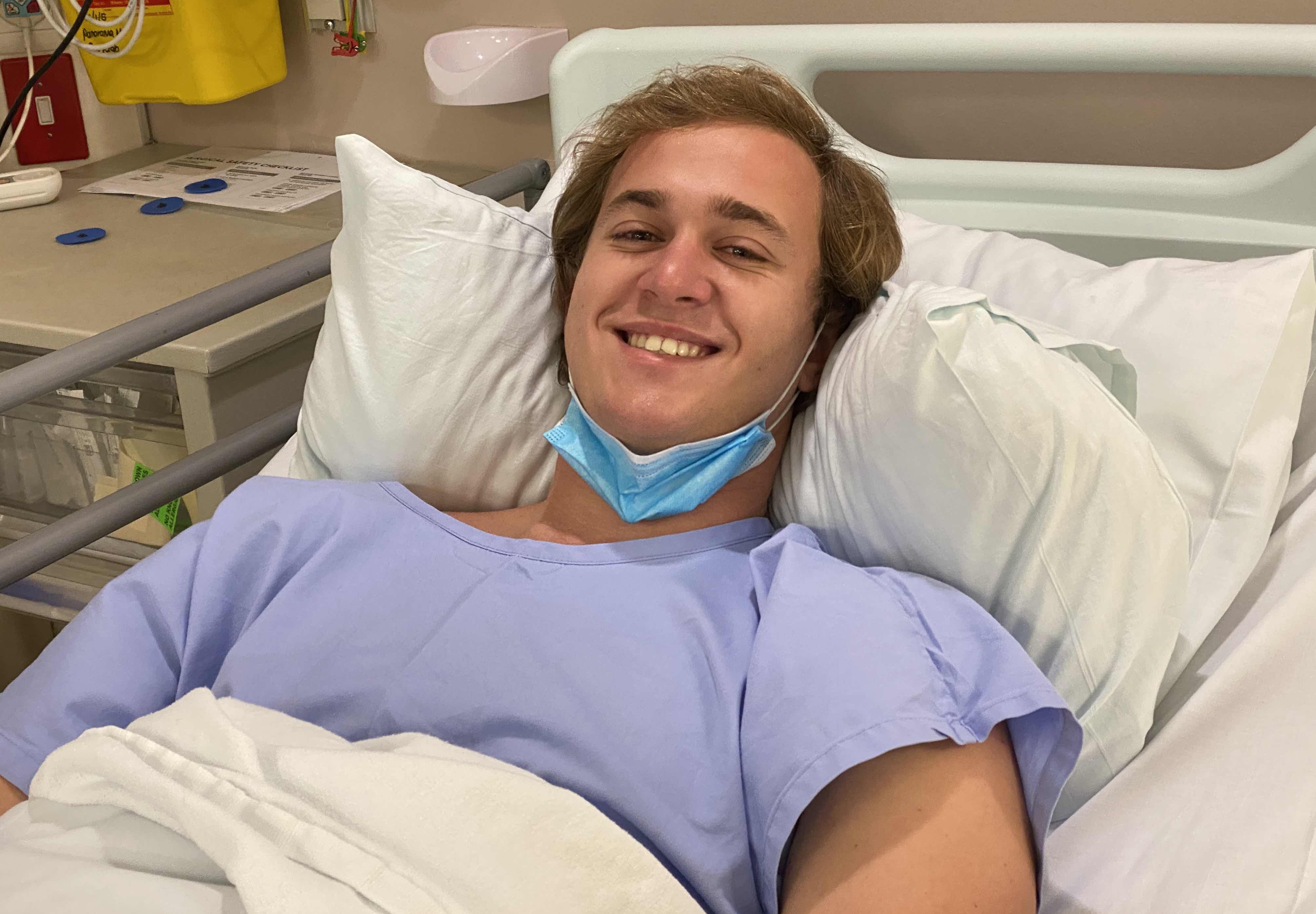 According to Dr Razeen Gopal, renowned cardiologist and electrophysiologist at the Cape Town AF Centre (CTAFC) based at Mediclinic Panorama, ablation therapy is the most effective manner to treat atrial fibrillation especially of recent onset or of short duration. AF is described as a ‘chaotic heart rhythm’ and remains a common cause of stroke. Cryo-ablation is at least as effective, if not superior to thermal energy (radio- frequency) ablation. Current literature has consistently confirmed that balloon-based procedures for atrial fibrillation such as cryo-ablation, are considerably safer than radio-frequency based ablation procedures, with a markedly reduced chance of cardiac perforation.” I would imagine this latest cryo-balloon technology now offers us an even safer option” Dr. Gopal explained.

Christopher Groenewald (18), was diagnosed with AF after experiencing heart palpitations since his 12th year. He became the 1st patient in the Emerging World (Africa and the Middle East) to undergo cryo-ablation with the new POLARx system. Christopher was discharged two days after the procedure and will soon enroll at UCT to study engineering.

Christopher Groenewald was diagnosed with symptomatic longstanding persistent atrial fibrillation, with severely compromised quality of life. His AF has proved to be most debilitating, causing recurrent palpitations, dizziness and fatigue. He was accepted for Dr. Gopal’s cryo-ablation programme once an implantable loop recorder (a small recording device, the size of a matchstick injected just below skin), confirmed the absence of simpler cardiac rhythms, serving as catalysts or triggers for his AF.

“All our team wants to do is change lives by giving patients back the type of lifestyle quality they were previously able to enjoy,” Dr Gopal said.

“I feel quite privileged that our centre has been chosen to showcase this latest innovation confirming our status as one of the leading centres in the region (Middle East and Africa” Dr Gopal said.

The technology used was the POLARx  device introduced by industry leader Boston Scientific.

With the latest technology, an experienced electrophysiologist can change the life of a person with a minimally invasive procedure generally lasting under an hour.

The new POLARx cryo-ablation system has been designed and built from the ground up to retain the best of an established approach and performance of cryo-ablation with additional expert-driven changes for an improved experience in the ablation procedure.

The introduction of the re-engineered therapy will be incorporated into treatment options going forward so as to give comprehensive and patient-centric options for the best treatment outcomes.

Atrial Fibrillation (or AF) is the most common heart rhythm disorder and affects one in eight people over the age of 60 years, but increasingly also affects younger people. Its incidence usually increases with age.

AF is an irregular heart rhythm that affects the upper chambers (atriae) of the heart. Due to extra electrical signals entering particularly the left upper chamber, the atriae may contract at a fast or slow rate but with an always irregular and chaotic rhythm. This quivering form of contractile dysfunction, instead of normal synchronous beating, may result in the turbulent flow of blood in these upper chambers, leading to pooling and clotting due to the slow flow, and resulting in catastrophic stroke.

Treating AF is important because:

Untreated AF leads to an elevated (up to 5 – 10 times higher) risk of stroke, since a blood clot from the atriae may lodge in the brain. This risk is elevated particularly in people with a history of stroke, diabetes, hypertension or those older than 65 years;

If the irregular heart rhythm continues on a permanent basis in a rapid and uncontrolled fashion (known as persistent AF) it can lead to heart failure, since the pumping chambers (ventricles) cannot contract effectively at a sustained rapid rate.

Untreated AF may eventually lead to changes in the heart’s electrical architecture, resulting in worsening of irregular heart rhythms.

AF is associated with symptoms of fatigue, shortness of breath, listlessness, palpitations, chest discomfort, dizziness and fainting, and deleteriously affects quality of life.

Cryo-ablation makes use of extremely low temperature (intense cold energy) to eliminate the effect of malfunctioning cells that spark additional electrical signals. The heart’s rhythm and rate can therefore not be regulated.

Two catheters are inserted through the groin and into the femoral veins, which are then pushed up into the right atrium of the heart. They are positioned in the left atrium through a small hole made in the septum, a membrane separating the two chambers. A cryo-balloon is inserted at the base of one of the four pulmonary veins, inflated and cooled. This creates a contiguous ring of strategically damaged heart tissue, which effectively blocks faulty signals. The process is then repeated on the other three pulmonary veins entering the left atrium.

Cryo-ablation has revolutionised the early treatment of atrial fibrillation and is now used universally in the management of both paroxysmal and persistent AF. The Consensus Statement of the European Cardiac Society state in their guidelines that cryo-ablation may be used as first line therapy for the management of symptomatic, intermittent (in particularly new onset) as well as persistent (longstanding) atrial fibrillation.

The technology has the added advantage of hardly, if ever, causing additional rhythm disturbances as a consequence of lesion formation, as in the case of radio-frequency ablation.

Dr Gopal notes that this has been a major step forward as these post-ablation arrhythmias related to scarring, from heat energy, may be the bane of existence of any electrophysiologist, often being very difficult to localize and cure. In the interim newer generations of anti-clotting medications also have emerged in the battle against stroke.

Currently, studies have shown, that early ablation treatment leads to better long-term results and improved quality of life. Dr. Gopal emphasises that the earlier patients are referred in the course of their disease the better the outcome of the therapy.
In the hands of an experienced and competent electrophysiologist the risk for complications is extremely low for either cryo-ablation or radio-frequency ablation

Approximately 90% of patients with paroxysmal (intermittent) AF stop taking anti-arrhythmia medication (while anti-clotting drugs may remain lifelong depending on stroke risk) within a year post-procedure. In longstanding persistent atrial fibrillation approximately 75% of patients recover from AF after two or three ablations sets. The management strategy at CTAFC has always been to solely use cryo-ablation for pulmonary vein isolation, and to consider RF ablation to perform linear substate modification, only in persistent patients, who have failed the initial therapy. A minority of individuals may need to remain on medications to assist in control of their arrhythmia. Success rates achieved at Dr Gopal’s unit compare well with the very best internationally.