The morning of your ablation a CT or MRI of your left atrium is performed so that we can import this into our EP Systems.

A number of techniques and approaches are currently used. The patient is often in atrial fibrillation at the beginning of the procedure. We encircle the veins in pairs and join up these circles with lines between them 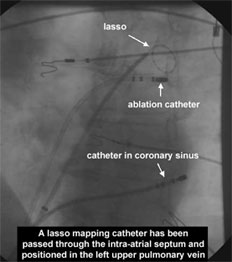 We also confirm that electrical isolation has been achieved by using a pulmonary vein mapping catheter. Alternatively the electrical isolation of the veins may also be achieved by a technique called Cryo ablation where freezing energy is transmitted to each vein mouth selectively through a highly sophisticated balloon apparatus. Once this has been completed the patient will hopefully have returned to sinus rhythm. If they haven’t then we perform an external cardioversion with standard defibrilation pads.

Watch the video below for an example of Cryo Ablation:

The success of the procedure does not seem to be predicted by whether the patient returns to sinus rhythm with the cardioversion or with the ablation. Following the left atrial procedure we also perform an ablation of the isthmus between the tricuspid annulus and inferior vena cava which will also prevent atrial flutter occurring after the procedure.

After the procedure an echocardiogram is performed to make sure that fluid has not leaked out of the heart. The patient is then returned to the ward for close monitoring by the nursing staff. Once the heparin (blood thinning medication) has worn off the sheaths (fine tubes) in the groin can then be removed. After this another 2-3 hours of flat bed rest is required while the veins start to heal up and a little longer before the patient can get up and walk around. Even if the patient was not on warfarin before the procedure, warfarin will be re-started on the day of the procedure with the heparin being re-started the next day. The heparin will be continued until the warfarin has taken full effect which is usually about 4 days. The warfarin is to continue for 3 months…

It is not unusual to have symptoms of chest pain and palpitation after the procedure. Even if atrial rhythm problems occur these, can often resolve on their own after 3 to 6 months. We are not sure why this happens but it seems likely that inflammation of the atrium following the ablation can be one of the reasons.