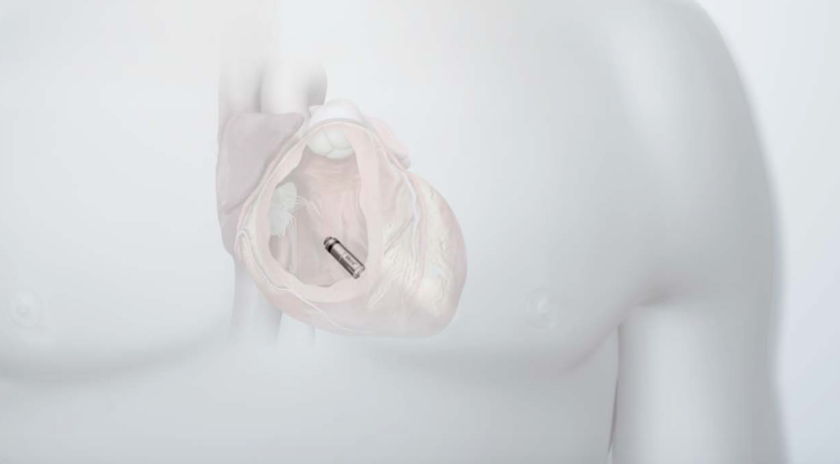 Watch this short video, with footage take in theatre during the first commercial series of intracardiac implants in Africa.

He was assisted by assisted by Dr Raed Sweidan, USA Board certified consultant cardiologist and electrophysiologist at the King Fahd Armed Forces Hospital in Jeddah, Saudi Arabia. 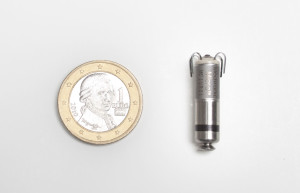 The minute pacemaker is entirely leadless, at 6.7 mm in diameter and 25.9 mm in length only one-tenth the size of an ordinary pacemaker. It is implanted directly in the right ventricle of the heart.

This transcatheter pacing system is the first FDA approved product with miniaturised pacing technology. “It is cosmetically invisible and is small enough to be delivered through a catheter via the femoral vein in the groin and implanted directly into the right ventricle of the heart, providing a safe alternative to conventional pacemakers without the complications associated with cardiac wires,” explains Dr Gopal. 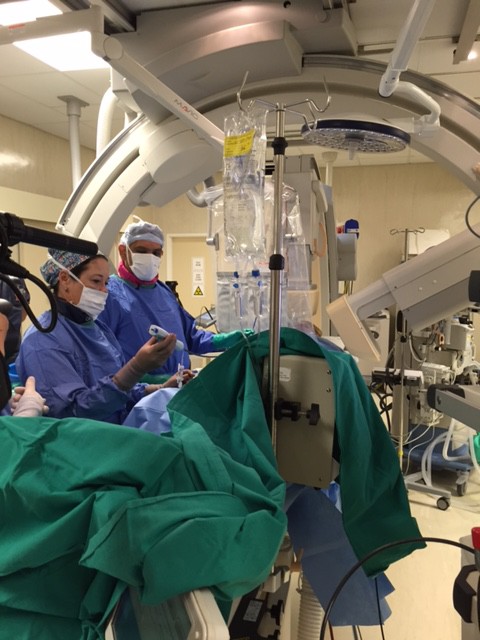 Dr Gopal and his team during the first commercial series of implants in Africa. 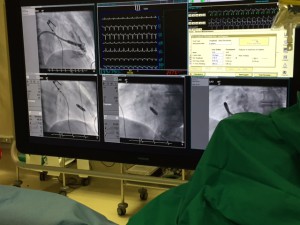 The pacemaker inside the heart

Comparable to the size of a large vitamin, the small intracardiac pacemaker is attached to the heart with small tines and this allows it to deliver electrical pulses that pace the heart through an electrode at the end of the device. The pacemaker is inserted in the right ventricle (thus first passing through the right atrium and the tricuspid valve) where it is carefully and specifically placed at the bottom part of the right ventricle, and attached to the thick part of the septum between the two ventricles.

Have a look at overview animation of the Micra transcatheter pacing system implant procedure.

Unlike traditional pacemakers, it does not require leads or a surgical ‘pocket’ under the skin, eliminating potential sources of complications related to such leads or pockets, the most feared being infection. The device responds to patients’ activity levels by automatically adjusting therapy. In fact the diminutive pacemaker is a rate-responsive device with a very sophisticated built-in accelerometer that can distinguish between the heart’s own natural beating rhythm and the movements of the patient.

A short videoclip taken in theatre:

“It is the first and only transcatheter to be approved for both 1.5 and 3 Tesla full-body magnetic resonance imaging (MRI) scans, providing patients with access to the most advanced imaging diagnostic procedures available,” says Dr Gopal. While the device is designed to be left in the body, the design does incorporate a retrieval feature should this be necessary. The average battery life of the device is about 10 years, and a second or even a third device can be placed in the right ventricle if necessary in future.

The exact steps in the procedure:
Step 1: The patient is placed under conscious sedation and the catheter is inserted via the femoral vein in her groin into her heart.

Step 2: The final preparation of the intracardiac pacemaker before insertion. Fluids and heparine is pushed through the pacemaker to reduce the bloodclotting risk.

Step 3: The pacemaker’s is inserted into the right ventricle of the heart. It should be lodged at the lower part of the ventricle next to the septum between the two ventricles since the septum is quite thick and tough and the perforation risk is diminished.

Stap 5: The pacemaker’s programmer is placed on the patient’s chest to activate and programme the exact pacing range required for the patient. The pacemaker has a acceleromometer and is rate response; thus the pacemaker will increase pacing as required by level of exercise.

Step 6: The programmer is removed.

Step 7: The catheter is removed via the groin and the small incision closed with a few stitches. Within three months the patients own endothelial cells will cover the pacemaker and will lower the risk of friction and rejection even more. 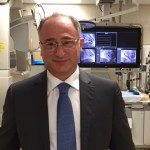 Dr. Raed Sweidal, electrophysiologist from Jeddah in Saudi Arabië, has performed similar implantations in Saudi Arabia. He attended the first commercial series of implants in Africa and South Africa. 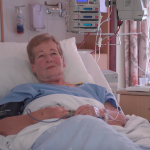 The first patient in the series – Joan van Niekerk (74) from Brackenfell – was discharged about 24 hours post procedure.

Comments by Mediclinic
Mediclinic Panorama Hospital General Manager, Riaan Vorster, reinforces the importance of such a procedure “It is important for our patients that they can benefit from such technology, the research has shown that the intracardiac pacemaker has very low complication rates and that there was a significant reduction in healthcare utilisation compared to traditional pace making systems. We need to offer solutions that are going to positively impact our patients’ lifestyles.”