THE ANATOMY OF THE HEART

The heart is a pump which is divided into two sections, the atria and ventricles, and into two halves the left and right. This means that the heart is divided into 4 chambers. The atria pump blood into the ventricles and thus have a relatively small job to do, and the ventricles pump blood around the body and thus take on most of the work. The atria are therefore thinner and smaller than the muscular ventricles. The right heart pumps blood through the lungs to get oxygen into it and the left heart pumps blood around the body including the brain. 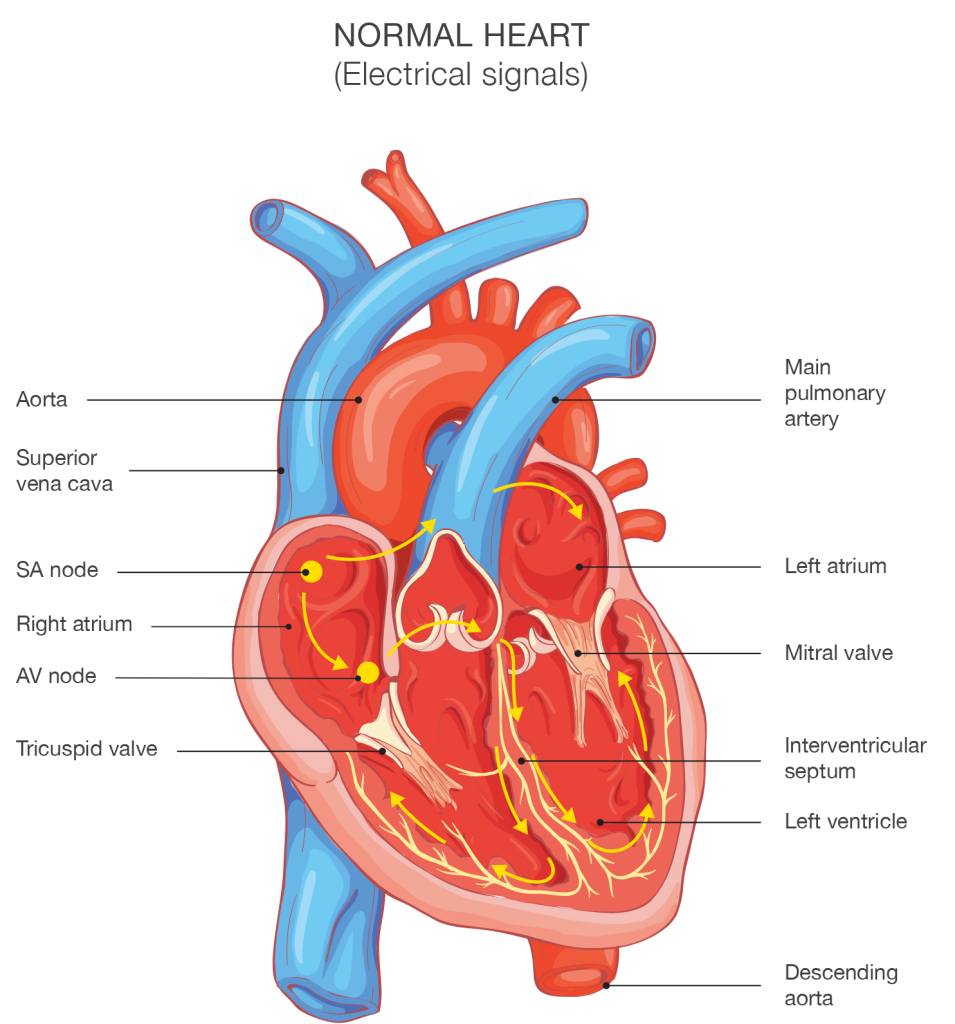 THE NORMAL ELECTRICAL SYSTEM OF THE HEART

Normally the atria pump blood into the ventricles before the ventricles pump blood around the body, therefore the atria and ventricles are working in sequence. The heart normally beats 60-80 times a minute however this gets faster if you need your blood to move through your body more quickly, for example during exercise. To allow the chambers to pump in sequence and for the heart to go faster and slower it has an electrical timing system.

It is this system that is faulty when people have abnormal heart rhythms, also known as ‘arrhythmias’. A small bunch of cells situated at the top of the heart, the sinus node, sends an electrical impulse out at about 60 to 80 times a minute (hence your heart rate is 60 to 80). This electrical impulse then washes like a wave across the atria from right to left being conducted from cell to cell and making the cells contract causing the atria to squeeze. The atria and the ventricles are insulated from one another (black line) so when the electrical wave hits this insulation it dies out and the cells await the next impulse from the sinus node.

The atria is electrically connected to the ventricle by the atrioventricular node and bundle branches which are electrical “motorways” that spread the electrical wave very quickly through the ventricles causing them to contract. The wave therefore washes through the heart from top to bottom before dying out, until the next impulse from the sinus node. 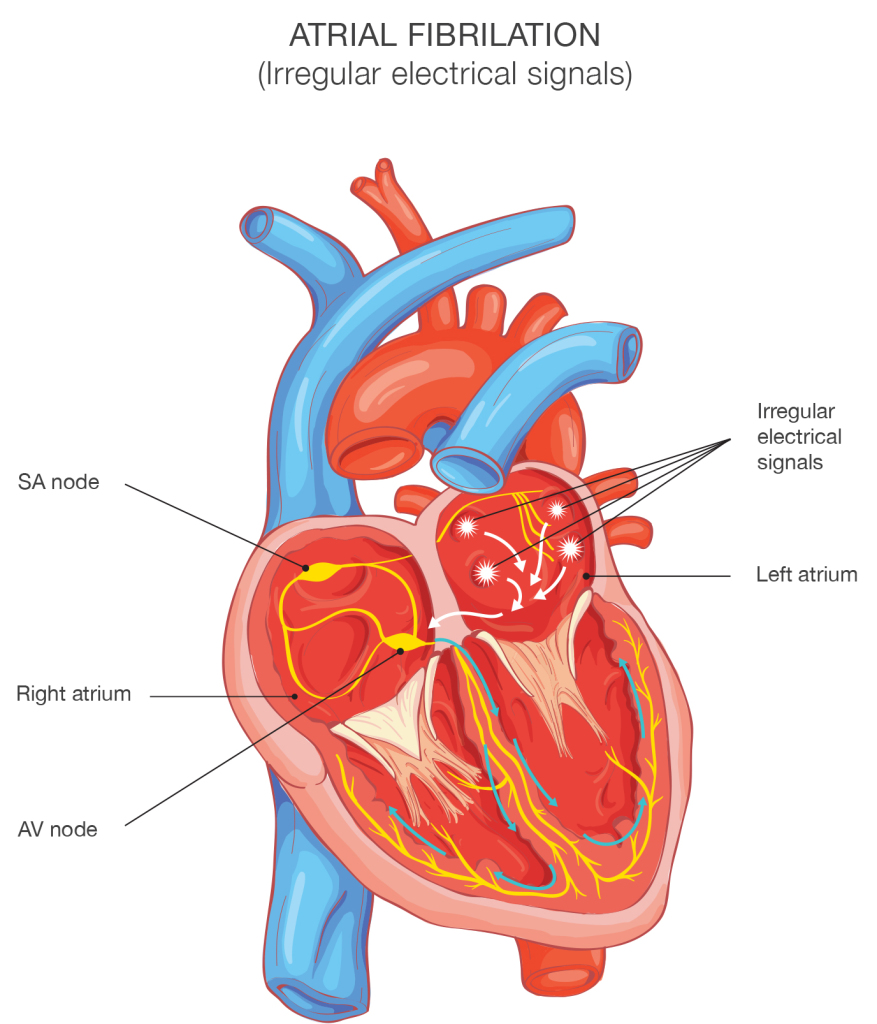 What happens during AF?

1. In AF the sinus node has lost control of the heart. Rather than a single electrical wave emerging from the sinus node, there are many groups of rogue cells which are generating their own electrical waves. Hence there are lots of smaller waves which are continuously and chaotically wandering around the atrium. These rogue cells are usually found in the left atrium, most often at the junction of the pulmonary veins (the veins which bring blood back to the heart from the lungs) which contain triggers serving as electrical sparks causing abnormal wave fronts.

In the presence of these chaotic electrical wave fronts, the atria do not contract but appear to shiver or fibrillate. This causes 2 important problems. The first is that the atria do not squeeze blood out of the atria properly allowing it to stagnate and clot. If clots form in the left atrium then they may be dislodged and fly off into the circulation, reach the brain and cause a stroke. The risk of stroke is dramatically reduced by taking warfarin or aspirin hence these drugs are very important in patients who have AF. Click here for a guide to which patients with AF should be taking aspirin or Warfarin.

2. The second problem is that the lack of atrial contraction reduces the pumping efficiency of the heart. The atria can be likened to a turbo-charger on a car. If your car is sitting at the traffic lights it does not use the turbo. The effect of the atrial contraction is similarly minimal when someone is resting, because all the blood flows into the ventricle on its own without the atrium. However when the traffic lights go green and the driver puts their foot on the pedal they will notice immediately that the turbo is not working because the car will be much slower than normal. The same is true for the heart, particularly in active people.

The atria are connected to the ventricle via the electrical connection the AV node (see figure). The AV node will respond to the chaotic electrical signals in the atrium and try to keep up. The ventricle (and therefore the heart beat and pulse) will contract irregularly, rapidly and with a varying intensity, because for each contraction of the ventricle will pump out a different volume of blood.